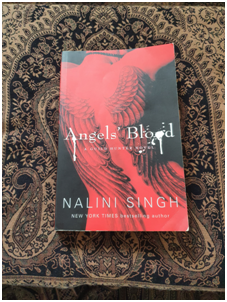 Welcome to my blog, I hope you are doing okay during this quarantine period and are filling your time with wonderful books.

Today I am reviewing the book mentioned above, it will be detailed but I will try not to give too many spoilers for those who may wish to read the book after reading this post.

Nalini Singh is one of my favourite authors since I started reading her books when I was a teenager. To learn more about Nalini Singh go to this link >https://nalinisingh.com/about-nalini/.

“Why are you tracking an archangel?”

“That, you do not need to know.” His tone was final. “What you do need to know is that if you succeed in finding him, you’ll be rewarded with more money than you can hope to spend in your lifetime.”

Elena glanced at the bloodstained napkin. “And if I fail?”

“Don’t fail, Elena.” His eyes were mild but his smile, it spoke of things better not said aloud. “You intrigue me – I’d hate to have to punish you.”

Her mind flashed to the image of that vampire in Times Square, that broken mess that had once been a person…Raphael’s definition of punishment.

This is the first book of the Guild Hunter series published in 2009, there are a total of 12 books in this series and the 13th will be released by November this year according to Nalini’s official site, the cover page has been released and you can pre-order your copy now at waterstone.  The book introduces us to the main characters, guild hunter Elena and Archangel Raphael.

Elena is one of the best hunters in the Guild with a very painful past because she is hunter-born. She was born to Margaret and Jeffrey, she had two elder sisters and one surviving younger sister. Elena is Hunter-born which means that she can track vampires by scent unlike other hunters who are trained to know vampire habits to be able to track them but when the gift is very strong, vampires might also be drawn to hunter-born by scent. She lost her two older sisters to a blood thirsty vampire; her mother was tortured by the vampire and couldn’t handle the loss of her two elder children so she took her life. This has always hunted Elena because she believed it was her gift as a hunter-born that attracted the vampire to her home, this also caused a rift between her and her father.

Elena and Raphael’s paths cross when she is hired by the cadre to track one of the Archangel’s named Uram who has declined to madness and was killing women in a gruesome way. The scenes of the way he displays his kills are not for the faint-hearted. During the course of the hunt for Uram, Elena and Raphael’s relationship progresses from fear to sexual intensity and finally commitment to each other when both their lives were threatened.

I love books that come in series because there is a possibility of learning more about the other characters that are mentioned, for example Raphael’s seven, other hunters, vampires and angels as well. I would especially love to know how Raphael formed his seven? The stories of how they met him and why do they pledge allegiance to Raphael?

When reading series I like to see how the relationship between the characters progress because strong relationship are not just about skipping off to the sunset at the end, it takes work and I like to read what realistic challenges they have to overcome albeit it is a fictional world.

For some great Archangelic fight scenes read the book.