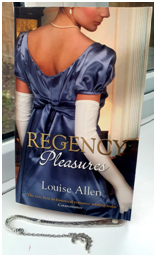 The first story begins with Talitha Grey who is almost caught nude by four gentlemen in an artist’s studio in the opening chapters of the story.

Talitha Grey and her mother had found themselves having to eke out a life of shabby gentility when her father dead suddenly five years previously. James Grey had left them no assets other than some shady investments, which proved to be worth less than the paper they were printed upon, and a number of alarming debts. With Mrs Grey’s small annuity and Tallie’s one hundred pounds a year they managed, although Tallie’s modest come-out was perforce abandoned and her mother sank rapidly into a melancholy decline.

When she followed her husband to the grave three years later, Tallie discovered that the annuity vanished with her mother’s death and she was faced with the very limited options open to a well-bred young woman with little money and neither friends nor connections.

Tallie has to make money and take care of herself while adhering to the rules of polite society that restricts the respectable jobs that a reputable lady can hold. She finds work as a milliner (someone who makes and sells women’s hat).

Tallie receives an inheritance from one of her deceased patrons which peaks Lord Arndale’s interest in her and so the story progresses.

It has been a while since I read a book where the lead female realises she loves the male lead and has a lot of angst on how to tell him or how to react to him for the rest of the book.

I am so glad that the idea of marrying someone because you were caught in a compromising position has been left in the past where it belongs.

The second story begins with Katherine’s stupid brother telling her that he has a huge debt under her name and no way to pay it off, the consequence of this is that Katherine will go to debtor’s prison until the debt is paid in full not her Idiot of a brother.

Solutions? Katherine has to marry a man about to be hanged because once he dies the debt dies with him. On the wedding night, Katherine finds out that her new husband is innocent and doesn’t deserve death so she sets out to clear his name.

Having cleared his name, the issue of the debt is still hanging and Katherine flees London with her new husband to his rather large estate (definitely not what she was expecting).

The story is a contrast from the first one in the sense that the marriage comes first and the male lead realized he had affections for the female lead first. Relationships that move from dislike to love can be so charming at times but I always love the ones where the man shows interest first and has to woo the lady.

I have never wanted to slap a character to high heavens at the first chapter of a book until Phillip (Katherine’s brother).

I found myself laughing at times which was very surprising. After reading a historical romance I always find myself speaking English in like manner, it is positively refreshing.

Do you love slow burn romance? Then this book is perfect.