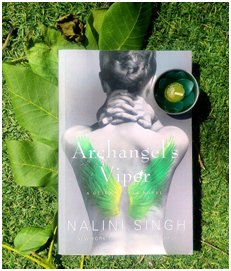 Hello Readers, welcome back to my blog. I hope we are all looking forward to a wonderful weekend.

The tenth book of the Guild hunter series.

Holly Chang’s story has been brewing since the first book in the Guild Hunter series and further in Archangel’s Blade, I was excited to read it.

The timeline of this story runs parallel to Archangel’s Heart and we got to see a little of the power structure that runs New York when Raphael is away. The story starts from Raphael and Elena’s absence as they are in Lumia for the Cadre meeting.

A bounty has been placed on Holly Chang’s head and Venom who has just returned to New York is assigned by Dmitri to protect her and find out who has placed the bounty on Holly. Venom enjoys nothing more than making Holly angry and she doesn’t want to spend more time with him than necessary but as the two known venomous beings they have a lot more in common than Holly initially likes.

The attraction between Holly and Venom builds as they hunt down the immortal who wants to acquire Holly and she continues to deal with the aftermath of her encounter with Archangel Uram. We discover that Dmitri hasn’t lost his touch in terms of scaring the living daylight out of other immortals and sadistic punishments despite his marriage to Honor.

I like a woman who goes after the man she wants although I am not emotionally brave to follow in like manner which is why I admire them so much because it takes strength to leave yourself emotionally bare to another. Holly’s strength in fighting for a new life after the atrocity she suffered is really inspiring and that stubborn determination to live is the baseline for her character.

Urgh!!! I hate snakes and maybe that is why this book wasn’t particularly thrilling for me. Although I like Venom and his memory of his Making is my biggest nightmare, I wasn’t foaming at the mouth to pick up this book everyday but I wasn’t disappointed either. Venom’s story is the most relatable to a lot of people, facing rejection from the people that should love you the most is not very pleasant and can leave an indelible hurt. It was a nice break from the devastating loss the other characters carry as their defining story.