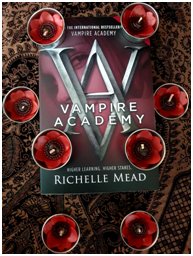 The story is about a vampire princess named Vasilisa otherwise known as Lissa and her guardian named Rose; that is the most succinct summary I can give. The book starts the same way the film does, with the capture of Vasilisa and Rose who had escaped from a secure school for two years.

The girls have to go through the ‘usual’ problems that teenagers go through as well as some unusual ones like finding out what kind of power Lissa has and how to keep her sane.

Rose is a bad-ass, sarcastic, troublemaker and Lissa is her opposite which means they balance each other but Rose is a loose cannon, I found myself cringing at some scenes when she displays her anger and recklessness. The friendship between the girls seemed more equal half way through the story whilst before that it was always Lissa depending on Rose.

I hope that one day I can evolve to a plane of existence where I can talk sense into bullies to make them change because I absolutely do not condone bullish behaviour. There was some bullying in the scenes of this book.

The book reads the same as the film which makes me commend the film for sticking almost exactly to the book. Although I knew the story and how the first book ends I enjoyed it even if I kept comparing each scene to the film. I can’t wait now to dive into the rest of the books in the series.