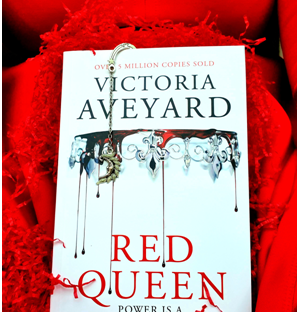 I hope we have had a good April and are leaving this month feeling accomplished.

Starting a new series of book is always daunting for me because I am very particular about finishing the series that I start, so I like to pick the ones that I think will keep me interested. I have seen on a lot of reviews for this book on instagram and after reading the synopsis I decided to try it.

This is a world divided by blood – Red or Silver.

The Reds are commoners, ruled by the Silver elite in possession of god-like superpowers. And so seventeen-year-old Mare, a Red girl from the poverty-stricken Stilts, it seems like nothing will ever change.

But Mare possesses a deadly talent of her own. One that threatens to destroy the balance of power.

Fearful of her potential, the Silvers hide Mare in plain view, declaring her a long-lost Silver princess. Knowing that one false move will mean her death, Mare must use her new position to bring down the regime – from the inside.

Now Mare has entered a game of betrayal and lies.

This book is so well written that I was caught off guard at how absolved I was in the story and the world within the first few pages. I wanted to keep turning the page to find out what happens next. The story and world building progresses seamlessly with each other, a lot happens before you know it and yet more to come.

Mare is a red girl from the Stilts who suddenly discovers she has powers like the Silvers who rule their world which is an impossibility. And so because of the public way her power was displayed during the Queenstrial – a display to look for the next queen among the noble Silver houses – the Royal family cannot kill her to hide what she is – a Red with powers. They make her a member of a long lost Silver family instead and betroth her to their second son to stop the other Silver noble families from asking too many questions that will threaten the power of the Royal family and the structure of the world.

Mare has to learn to navigate the glittery cold world of the Silvers with the knowledge that one mistake can lead to the death of herself and her family. Meanwhile, war is brewing and rebellion is afoot.

Change always comes with a price. This reminds me of a quote on the back cover of This Golden Flame which says “Change your fate, pay the price.” The price for changing the fate of the Reds is more innocent lives lost but the alternative of staying quiet under the rule of the Silvers is not in the best interest of the Reds either. As the cover of Red Queen says “Power is a dangerous game”. The game Mare has to play is very dangerous indeed. She is a Red pretending to be a Silver and she also has the attention of both Princes that she has conflicting feelings for.

The plot twist of this story really swept me aside; I did not see it coming at all. I thought I had predicted what will happen and how the new world would be shaped but I was fooling myself and Victoria took the wind from my sails. I am so so happy with this story, it is spectacular. I don’t want to give too much away for those who want to read this book but let me tell you that the rebellion has only just begun and Mare has many more lessons to learn even though she thinks she has learnt them by now. Human beings are unpredictable.

“Thief,” he says, a strange surprise in his voice.

I blink at him, fighting the urge to laugh. I don’t even have the strength to protest. “Obviously.”

I loved this little exchange not because it shows Mare’s sass – there is a better quote in the story that shows that – but because it is the beginning of the lightning that strikes both Mare and Prince Cal. It shows what Mare is – that even when she is down and defeated she is able to find some strength to keep fighting.

I loved how well written this story was, it was fast paced without feeling rushed. A lot happens in the book that makes the story telling and the world building flow excellently well together. I couldn’t really find anything to complain about which is why this is my second five star rating of a book this year. I don’t give my full stars too often so congratulations Victoria Aveyard.